If you’re a football fan, chances are you had already seen Kelsey Fournier before she won the title of Miss Rhode Island 2012…

Kelsey was a Cheerleader for the New England Patriots for 3 years prior to winning the title… We love the fact that Kelsey says she’s now able to have her entire graduate degree in health care education paid for because of her scholarship earnings as Miss Rhode Island! 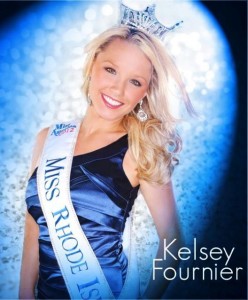 A little background on the state of RI… In recent years, Rhode Island’s been known for having contestants that excel in one particular area of competition… For example, at Miss America, Allison Rogers (2006) won the Quality of Life Award, Ashley Bickford (2007) won a preliminary swimsuit award, Julianna Strout (2009) was a non-finalist Talent award winner, and Deborah Saint-Vil (2010) was a Talent award winner and Top 15 semi-finalist.  They’re still waiting on their first Miss America.

Now – if we told you there were only 9 girls competing this year at Miss Rhode Island, you might wonder if the competition is going to be any good… Rest Assured, just because they are few in numbers, it doesn’t mean this is going to be a walk in the park for any of the contestants…

No preliminary competitions – it’s Winner Take All on June 1st!!!