You are here: Home / Thursday Post / Bring on the Predictions!

Every year, about this time, I begin to wonder if I’ve fallen off the deep end.

Truth is, I don’t actually FALL off the deep end until about June 20th or so… But by that point, I’ve already been drifting in the deep end of the crazy-pool for a few weeks and it doesn’t even matter. I don’t get much sleep, my husband leaves the house, the dog is sporadically fed, and my personal hygiene routine becomes questionable.

What’s the plight of my ruin…?

In case you’re new to Pageant Junkies, here’s a little background for you…

Once upon a time many, many stilettos ago, I was on social media, desperately trying to find more information about who had already won their state title and would be heading to Miss America. Honestly, I was pretty frustrated – simply because the information was out there, but I was surprised at how L O N G it took for the information to be posted to social media! Sometimes the state winner wasn’t even announced until a day or two later!

Fast forward a few years, and boy howdy – times have certainly changed! Now, the information is available within seconds of the winner’s name being announced (as it should be)! In addition, you can pretty much learn anything you want to learn about a given contestant, thanks to social media. That’s when it hit me…

Could I predict who might win each state title,
simply by researching all of the contestants online???

Soon after, I began posting my predictions, and more and more people became members of the “Junkie Nation” by following along to see how well I did. Truth is, we did pretty good – with 82-87% accuracy in 2013 and 2014, and the Pageant Junkies became known for our “Here’s Who to Watch List”.

Then, with thousands of hours of research and a lot of glitter behind us, I challenged myself to ONLY LIST 5 NAMES for each state title in 2015.

Frankly, it’s a little crazy trying to pick only 5 names when so many incredibly talented, beautiful, accomplished young women enter state pageants each year (there were actually 1400 young women who competed at the state level in 2015)… But, I’d say we did alright! Seventy-Five percent of the time, the woman who went on to win her state title, was on our Top 5 list (which was kinda surprising, even for us!)

So – This year, we’re doing the Top 5 list again – But with one significant change.

This year, our predictions are only available though Pageant Junkies Newsletter…

In the meantime, if you want to know HOW we go about predicting potential state winners, we have a couple of resources for you!

First – Video Number One – Recorded about this time last year…

For all the rest of you Junkies who already know how this works – Here’s the full list of state pageants coming up over the next several weeks!  We kick off in April, have a few more in May, and officially go kooky-wacko in June with 38 state titles awarded, before finishing up in July. 🙂 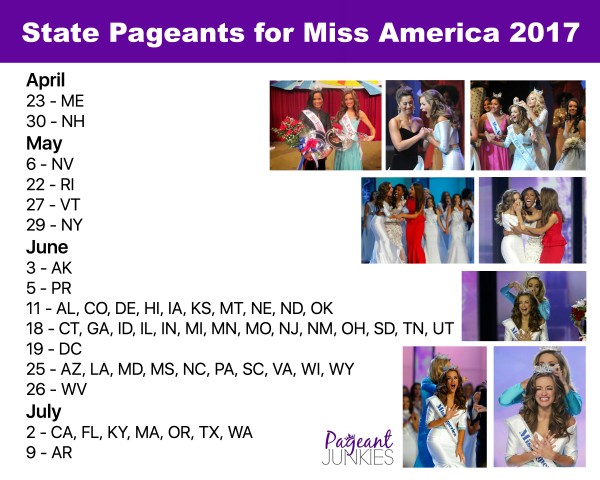 And there you have it! Once again, if you’d like to see our predictions, just sign up asap! Our Miss Maine predictions will officially be released on April 22nd!

“If we say your name, we hope you prove us right!

And if we don’t say your name,
WE HOPE YOU PROVE US WRONG!!!”

Cue the Bert Parks – and let’s ALL sing along…

“There she is… Miss America…”