You are here: Home / Weekly Column / Two Weddings and a Pageant

This weekend, I had the great fortune of attending two weddings on the same day.

Actually, it wasn’t as easy as it sounds.  Both weddings were held at the exact same time – with one being 25 miles away from my home and the other being 90 miles away from my home.  Because I’ve known both grooms in each wedding for more than 10 years, it was important that our family find a way to attend both events – which wasn’t easy, but it certainly was entertaining!  Let me explain…

This wedding had all that you’ve come to expect in traditional wedding ceremonies… The bridesmaids had baby’s breath in their hair, the groomsmen all wore vests, and there was a 3 piece string ensemble.  Overall, it was pretty “by the book”.  But the location was far from traditional!  Written on the mailbox outside the venue, it actually said the words, “Salvage Yard”.  There were old tractors, rusty bicycles, vines and twigs galore… Not to mention wagon wheels, old soda machines, and a giant wire sculpture of a rooster (seriously – the thing is like 15 feet tall).  People sat on blankets during the reception.  Burlap covered the tables.  The Bride was lovely, the Groom was happy, and everyone rejoiced in their love.

This wedding looked anything but traditional.  The groom wore high-top sneakers, even though his groomsmen wore dress shoes.  The majority of the bridesmaids had punk rock hairstyles and tattoos on their arms, backs, legs and/or decolletage.  Earrings, long beards, and hipster glasses were adorning multiple guests – along with masks, strange hats and various items with feathers!  However, this wedding was held in a private mansion that was grand in scale and offered sweeping views of the eclectic area in which it was located.  The Bride was lovely, the Groom was happy, and everyone rejoiced in their love.

In summary – each of these weddings, while beautiful, had their own ‘mis-match’ of sorts, which made them memorable and unique.  Crazy thing is – this is a pageant blog, not a wedding blog.  So that begs the question…

“What did these two weddings teach me about Miss America?”

Funny you should ask…

We think these weddings represent what the state of New York has done the past three years in a row with their Miss America contestants.  In essence, the reason Miss New York can claim a Miss America 3-peat is because they’ve been sending “non-traditional girls” to the big dance in “traditional” Atlantic City.

Now, before you get all up in a tizzy, let us explain what we mean (and what we don’t mean).

Mallory, Nina and Kira all have a few things in common that do “traditionally” win at Miss America…

Seriously.  We haven’t seen Kira’s interview – but I don’t think we need to.  And we already know how strong Mallory and Nina were in communicating their message in 10 short minutes.  Every Miss America who’s been crowned (long before the NY ladies came along) has been a strong communicator.  You can’t be Miss America if you’re not articulate and sharp – period, the end.

2. They all had compelling platforms.

Stopping sexual abuse, embracing cultural competency (or standing against racism) and ending domestic violence aren’t ‘safe’ platforms – but they are compelling. They all require someone to take a stand against injustice.  It’s hard to deny injustice when someone talks passionately about it.  It’s compelling and effective.

3. They knew it was important to stand out from the crowd.

Prior to her interview, Mallory tweeted a judge (which is all fairness, I’m not sure you’re allowed to do anymore – lol!).  Nina knew Miss America didn’t look like she did 10 years ago and wouldn’t look the same 10 years from now, and Kira will forever be remembered as the Miss America with the cups.  When there are 52 other smart, talented, beautiful women competing for the job you want, you realize you need to do whatever it takes to be remembered.  That’s just good business practice. 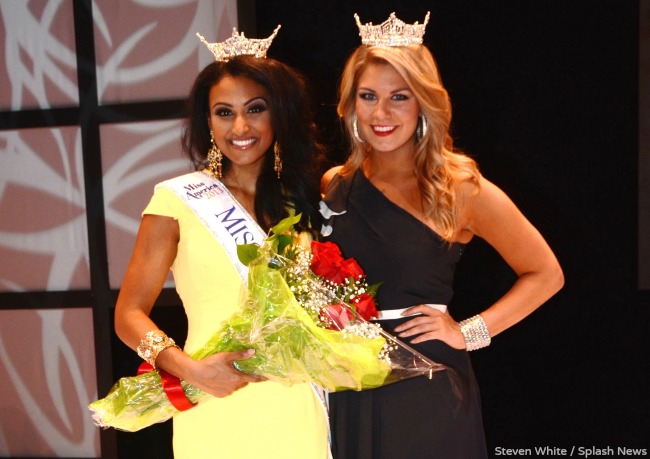 However – just because Mallory, Nina and Kira all brought several “traditional” elements to their competition – they also had several non-traditional components about them as well…

1. Their evening gowns were super-simple, with very little (if any) bling.

They each had jewelry with high sparkle and shine – but nothing on the gowns themselves (Kira had a bit on her back – but that’s it).  It takes guts to wear a dress on the Miss America stage that has zero adornments on it.  If it’s too plain, it’s easy for the girl to look plain too.  And trust us – Miss America is not interested in crowning someone who’s “plain”.  We do know that much!

2. Their talents weren’t what you normally see crowned at Miss America.

Face it.  The Talent each of these ladies displayed on the Miss America stage was tailor-made for a runner up position.  I’m not denying the skill level or entertainment factors – not in the least!  I’m just saying, in years past, talents like Mallory’s, Nina’s, and Kira’s, typically settled for a runner up scholarship – rather than the winner.  Tap dancing to James Brown, performing a Bollywood dance, and using a plastic cup as percussion, isn’t usually classified as the kind of talent that wins Miss America (Nina and Kira both admitted it themselves – not sure about Mallory)… However – in each situation, entertainment was a key factor and it worked. 🙂

3. They weren’t a carbon copy of the last winner.

Tempting as it may be, Miss New York has not sent the same girl 3 years in a row to Miss America. They also didn’t try to ‘mold’ each girl into the mirror image of the previous girl. Unfortunately, there are some states out there who are trying to make their current winner look, act, and talk like the most recent woman from their state who performed well at Miss America – Even if that was 20 years ago!!! Mallory, Nina, and Kira are all different from each other in their looks, their mannerisms, their styles, and their personalities. No need to copy someone else when you’re an original.

Alright… You may be thinking we’re on to something… but what does this mean moving forward?

Well – before you ever make it to Miss America, you have to win your state title first.  So, what’s a girl to do when she’s a non-traditional contestant caught in a traditional state?

If you know you’ve got the goods – but you just doesn’t ‘fit’ the model of what your state typically crowns, you have a couple of options…

1. Play Politics.  LOL – This suggestion isn’t what you think… but we couldn’t resist the title.  We’re not suggesting you start forming alliances, blackmailing, and kissing up to people in charge – we’re saying you should do what successful politicians do.  Politicians all “play to the base” for their party’s nomination – then once they’ve won their primary, they start courting independent voters by ‘moving to the middle’ before the general election.  As a contestant in this scenario, you’d do what you traditionally need to do in order to win your state pageant – then, if you wish (and if your state will let you), you become a bit more ‘non-traditional’ in your preparations for Miss America.

2. Social Media is your Friend.  A lot of girls try to keep their performance details a secret.  But social media is the perfect vehicle to ‘set the tone’ for who you are and why you’re non-traditional in an awesome way!  If you have a non-traditional talent, don’t wait to showcase it at your state pageant!  GET OUT THERE and show the rest of the world via social media what you have to offer – NOW!  The same thing goes for your platform, or your quirky sense of style, or your non-pageant haircut… Whatever!  The goal is to ‘intrigue’ people by not being a wall-flower.  Be confident – and Be You!

3.  Move.  Honestly – if you’re a non-traditional contestant who’s been competing in a more traditional state without success, find another place to compete.  Lots of girls do it – there’s nothing wrong with it.  As long as you fit the criteria for competing in a different state (aka residency issues), Junkies say “go for it”.  In case you didn’t realize it, Mallory, Nina and Kira were all born and raised in states other than New York… and it certainly worked for them! 🙂

And there you have it!  Who knew these 2 weddings would become the perfect pageant analogy for this post!?!

In the end, whether you consider yourself a more ‘traditional’ contestant or there’s a more modernistic pageant chick inside of you just waiting to be set free – if you stay true to who you are, we know you’ll be sure to live happily ever after.

You may now wave and blow kisses to the crowd.