You are here: Home / MAO Mini-Series / There She Is…

And the winner is…

Savvy has been a favorite of many Junkies ever since she was crowned Miss Arkansas – The girl has some MAD social media skills! Once you follow her on Instagram or Facebook, you feel like you know her. More importantly, she draws you in – and you find yourself liking her, even if you’ve never met her! Talk about a HUGE advantage! When someone has that kind of intangible quality, you can’t help but thinks she’s going to rise to the top! And to be honest, Savvy certainly seems as if she was born with an ability to stand out from the crowd! 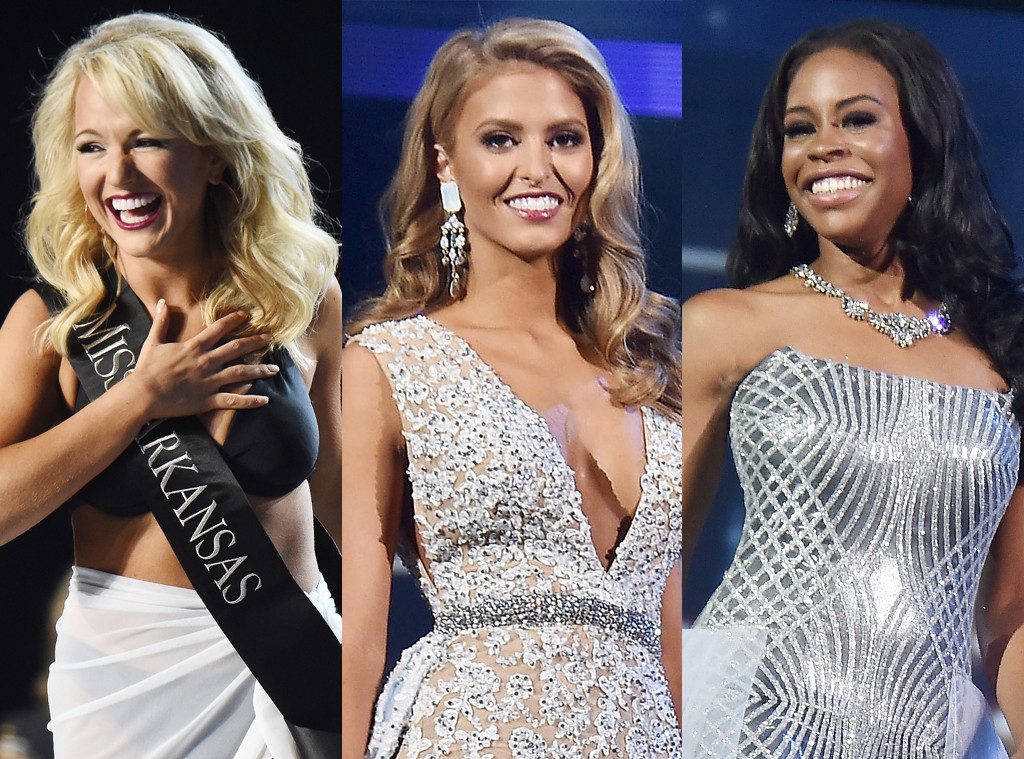 During our Miss America Mini-Series, we highlighted the fact that there were SEVENTEEN former Outstanding Teen state winners competing this year – And that we wouldn’t be surprised at all if one of them won… Well – She did! However – in addition to Savvy (former AR OT), THREE MORE OT’s were also in the Top 5! Arkansas, South Carolina, New York and Mississippi were all former Outstanding Teen state winners (DANG!). In addition, 5 of the Top 10 were former OT winners – AND – 7 of the Top 15 were OT state winners as well!

THAT’S AN AMAZING TRACK RECORD!!! It tells me the same thing I’ve been hearing from state winners for the last couple of years – If you want to be Miss America, GET INVOLVED in your state’s OUTSTANDING TEEN program! The skills you learn and the confidence you gain are the best preparation for becoming a top contender at Miss America. Hands Down!

So – I’ve been getting a lot of feedback (text, email, phone calls) from people who were not impressed with this year’s show from a production standpoint. Personally, I’ve come to expect the same old, same old for the last few years, so admittedly, my expectations weren’t all that high to begin with. It’s the same production company and the same players. When I realized the ladies were going to be dancing in their Joseph Ribkoff dresses while introducing themselves around Atlantic City yet again – I resolved that the production overall wouldn’t be much different than years past (although, having to introduce yourself in the aftermath of Hurricane Hermine was a bit much).

Interestingly, earlier this summer I posted a blog about the Miss USA pageant (my first time ever). Inside I talked about how Miss USA gets 3 hours and Miss America only gets 2 hours – And that Miss America has an additional element of competition to squeeze into the telecast (Talent). Until and unless Miss America gets more air time (or suffers a ratings tank under the current production company), it may be unfortunate, but my guess is the show is going to look a lot like this for the next few years.

Honestly, I would bet there are already conversations going on about getting that 3rd hour for the 100th anniversary – However, that’s not until MA 2021 – Which means a few more years of everything we just saw last night. My best advice? If you lower your expectations (as I have), you won’t be so disappointed.

Another thing that has people up in arms is the type of questions asked during the final OSQ. This year, they were highly political – which I think is to be expected in a political year. After all, Miss America is probably going to be asked her opinion about the presidential race – She should be able to communicate about it clearly and with a great amount of tact.

So – likely the most shocking part of the night was seeing three preliminary winners not make the top 15. It’s the first time since 2010 that we’ve seen 3 prelim winners come short (not my knowledge – but rather – a brilliant factoid from our favorite Junkie Research King), and I’d by lying if I said it wasn’t a smack-me-in-the-face kind of moment! Especially since so many of the prelim winners weren’t necessarily considered “tops” on their night from members of the pageant community… Which made us all assume they must’ve had stellar interviews (and their interviews carried over into their prelim win).

Now – Looking Back – You can see the one thing that every contestant needs to remember when competing in pageants… CONSISTENCY MATTERS.

The only woman to win a prelim in the Top 5 was the winner. Only 2 prelim winners made the Top 7! One of the biggest mistakes you could make is to lose your confidence and begin doubting yourself because you don’t win a prelim. Obviously, it’s just not that big a deal. Rather – if you consistently finish in the Top 2-3 in your group, in every category, you will make the semi-finals.

Finally – it’s soooooooooo frustrating for Miss America fans to know how important interview is to the overall competition – But not be able to see first hand who has a strong interview and who doesn’t. You do get a pretty good sense of each contestant’s speaking skills during OSQ, but with only 20 seconds to answer a question – it’s just too little too late.

Interview drives this competition – And I’m not arguing with that concept! I believe Miss America is first and foremost, a spokesperson for the brand! Therefore, if you’re someone who is having a hard time figuring out what you should be doing differently in your pageant career – A great place to start, is by working on your interview! I’m really looking forward to this year’s Miss America interview DVD and I would highly encourage you to purchase it when it becomes available (previous contestant interview DVD’s are also available at MissAmerica.org).

Ok… One of the best things about Junkie predictions is that we know we’re not perfect. We’re well aware of the fact that we don’t always get it right – and yet – we continue to “put ourselves out there” and hold ourselves accountable to the results, year after year after year.

This year, was a bit of a doozie.

In addition, earlier in the week I told WAPT TV that I thought Mississippi would do well on Sunday night (interview here)… And when I checked back through my own predictions, the only ladies I didn’t include in any sort of a potential prelim win, placement, or non-finalist award, were California and New York. Everyone else in the top 15 received some sort of “nod” or acknowledgement from me during competition week.

All that being said – Savvy is the only member of the Top 5 that I chose. However, Savvy was also my pick to win the whole darn thing – and she did. I’m taking comfort in that fact. 🙂

– Texas does not disappoint. Since 1970, they’ve made the semi-finalist cut (Top 10 or Top 15) at Miss America THIRTY-SIX times! That means, 76.5% of the time, over the past FORTY-SEVEN YEARS, Miss Texas is in. We respected their track record this year and she did not let us down! Great work Caroline!

– Miss America’s Outstanding Teen 2013 Rachel Wyatt finishes as the 1st Runner Up to Miss America – Which is a HUGE accomplishment given the pressure and scrutiny she likely faced since her crowning in June. No doubt, she certainly looked like a Miss America last night – and came oh-so-close to taking home the crown!

– Both outgoing Miss America Betty Cantrell and incoming Miss America Savvy Shields advocate for a “healthy eating” platform… I believe this is the first time we’ve had similar platforms back-to-back since the platform was established.

– For those of you who’ve always wondered, Finals Night Judge Mark Cuban confirmed in a video (watch it here) – that the second panel of judges DO watch the Top 15 in interview before the competition begins. As stated above, that’s why interview is super important – You have to have the skills to win over 1 panel in person, and a second panel via video.

– A big “breaking through” shout-out to Kylee Solberg, Miss Idaho… Sierra Sandison was America’s Choice in 2014, but Kylee is the first Miss Idaho since 1971 to be named a semi-finalist on her own merit! Idaho also made the cut at MAOTeen this year – Along with OK, TX and LA (all 4 of these states had semi-finalists for MAOTeen and Miss America)! CONGRATS!!!

– There are also a few states that deserve recognition for how incredibly consistent they’ve been recently… Here’s a few stats for you… Texas and Oklahoma are now currently riding the nation’s longest “semi-finalist” streak at 8 years in a row. New York has made it 6 of the last 7 years, Iowa and Tennessee have both made the cut 5 out of the last 6 years. Kentucky has made it 7 of the last 9 years – And with Savvy’s win, Arkansas has been named a semi-finalist or better, 10 of the last 13 years.

– Not that it matters, but I created a list before the ladies even left for Miss America… And on that list, I had 11 of the Top 15 (lol!). Guess I didn’t learn my lesson from MAOTeen after all (see what I’m talking about right here)…

AND THERE YOU HAVE IT!!!

As always – THANK YOU for those of you who continue to enjoy our Miss America/state prediction season… It’s not easy being the Junkie who puts her neck out on the line year after year, but I continue to do so because of the Junkie Nation. YOU GUYS are the ones who motivate me every day… In fact, I’m super proud of the community we’ve built together – One that’s positive and fun without being overdramatic and/or rude. And in my opinion, if there’s anything the pageant community needs – it’s more fun and less rude!

So – Thank You Junkies for another amazing year… I couldn’t have done it without you!

And until next year – When we once again do our best to predict the woman who fully exemplifies the qualities and ideals that Miss America stands for – We hope you find a way to impact your own community for the better! Start telling young women about the program and how they can benefit! Encourage leaders in your area to get involved and learn more! Advocate for those who are making a difference – And above all else, work to become the best version of yourself. When you do – You’ll never lose.

Carrie Lakey is kind of obsessed with Miss America…
So are 18,000 of her closest friends.